This week I have been lucky enough to test two of the patterns in the Pattern Revolution boy bundle. One from GreenStyle Creations because I have tested for them before, (see my previous post on the Taylor Shorts) and one from the new designer Winter Wear designs.  I was really pleased to make something for Mr 7.  He is much harder to sew for as he as at school.  My colour choices were influenced by this.  Red and Navy are his school colours and as an extra bonus, he looks fabulous in them. :-)

I started with the Winter Wear Aviator pants. I loved the options, but chose to keep it simple first time around and did the contrast ankles and slash pockets.  I used sweatshirt fleece for the legs and contrast panel and navy ribbing for the waistband and cuffs. (blue-grey and navy) was a big hit and he insisted on wearing them before I had finished them. Hooray for fleece, because there was no fraying!

I added elastic all the way through the waist, because my boys are very active and quite lean. I always feel better with some extra protection - you don't want your pants falling down in the school yard!  They do look a bit strange from behind as he has a tendancy to pull his pants up as high as they can go and I didn't notice at the time. He is occasionally called "Harry High Pants" as a result (No, Harry is not his real name!). The rise on these was a bit low, this was fixed on a revised draft.

The second pair - the ones for school were made with polar fleece with red broadcloth for the double welt pockets.  Let me say I was really pleased at how well the pockets turned out for my first attempt. I did watch a YouTube video to assist but the pictures in the final pattern are really helpful.  I love how much you can learn on YouTube when sewing classes for clothing are  hard to come by in my area.

As you can see the rise in these pants is higher so there is not as much bunching around the bottom.  Overall, this is a good pattern with great instructions.  I hope that I contribute in some part to the success of the pattern. 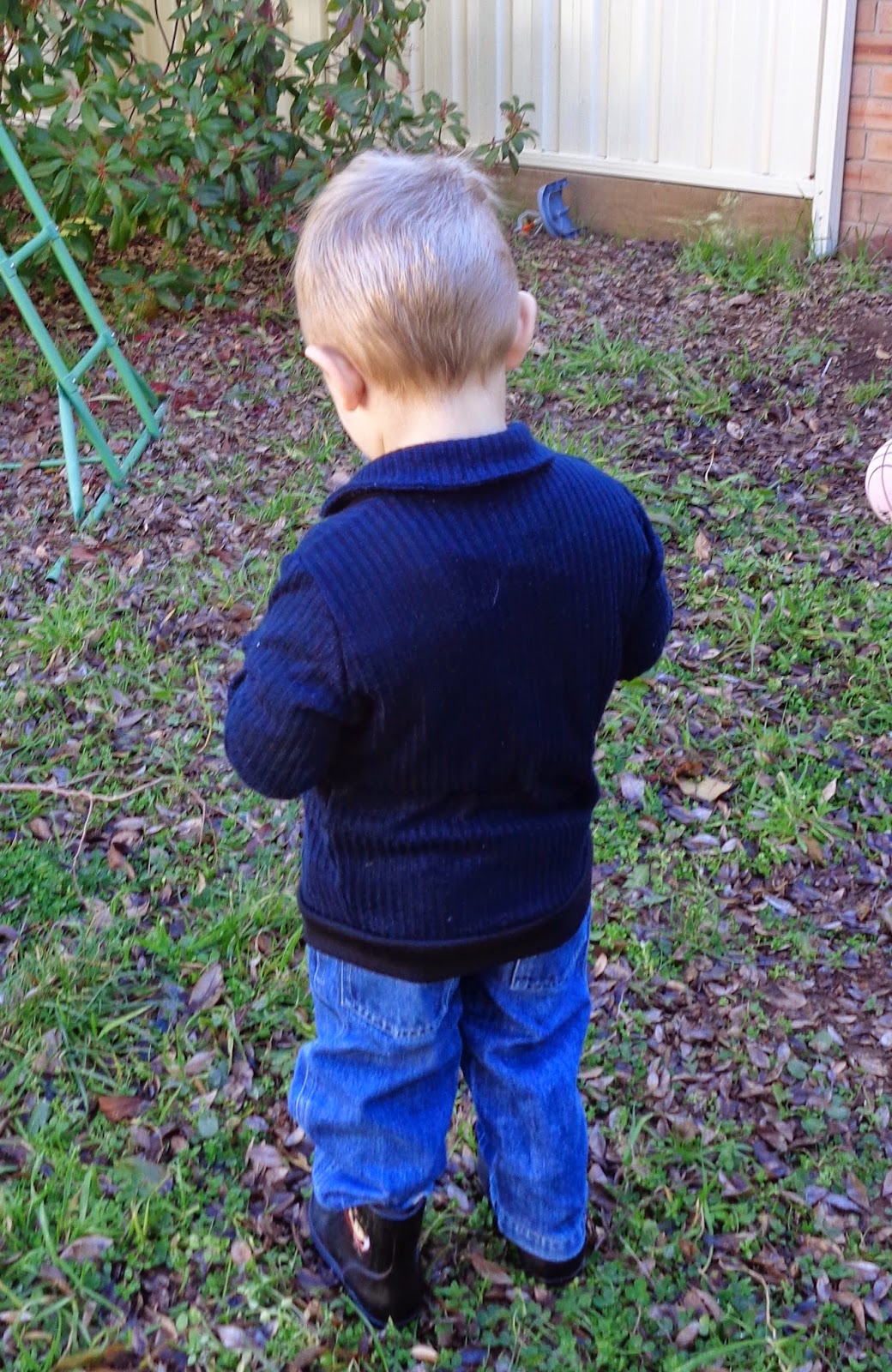 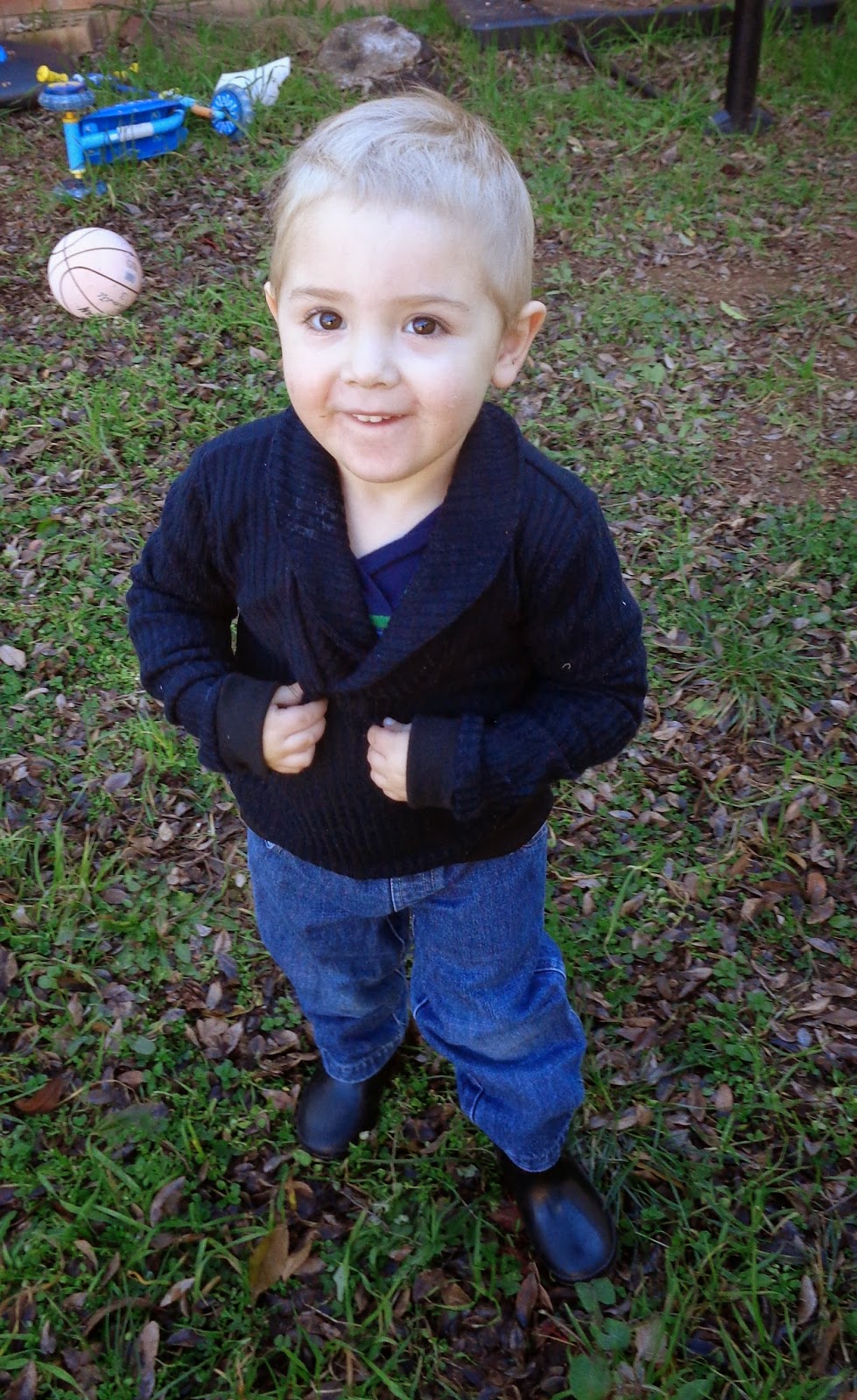 After the pants, I moved on to the GreenStyle Scarf Neck Pullover.  I actually made one for each of my boys starting with Mr 2.  For his I used some black sweater knit from the stash - an op-shop bargain - and some matching ribbing for the cuffs and bottom band.  I made a size 3 as he is a big boy and is the same size as an average 3 year old - measurements and all.  It went together very quickly and it looked so good finished that my sister thought it was a designer label!  Her jaw hit the floor when I told her I made it!  As you can see in the pictures, he was impressed too.  The only variation on the pattern was that I topstitched the collar, as i was concerned about ironing the fabric enough to get a smooth line.

For Mr 7 I went with a size 8 because he prefers a slouchier fit. In line with choosing fabrics for school, I selected a red polar fleece for the body, red ribbing for the arms and a contrasting blue collar - I am pretty pleased with the effect. I used the length for the size 8 as I wasn't planning to add a bottom band to his.  If I did forget to take up the sleeves and as a result they are a bit long.

Overall it is a great sweater that has held up well to playground (and back yard... and living room) rough and tumble.

I highly recommend these patterns! The Winter Wear Aviator Pants and the GreenStyle Scarf Neck Pullover will be available as part of the Pattern Revolution Boy Bundle on 22 to 29 August 2014.

Suzanne
I am a single mum of two boisterous boys, Mr 2 and Mr 7. I am a passionate about sewing and have an addiction to fabric. To see more of my work, you can check out my Facebook page, www.facebook.com/biggcreationscanberra